There has been some talk in the media lately of a double-dip or second housing correction sometime in the future. Even Lee County Property Appraiser, Ken Wilkinson, predicted another round of issues upcoming.

Mr. Wilkinson was quoted as saying, “Although most would probably agree that single-family residential values are at or near the bottom, commercial values are headed for further declines based on what our commercial analysts see and what I hear on the street.” 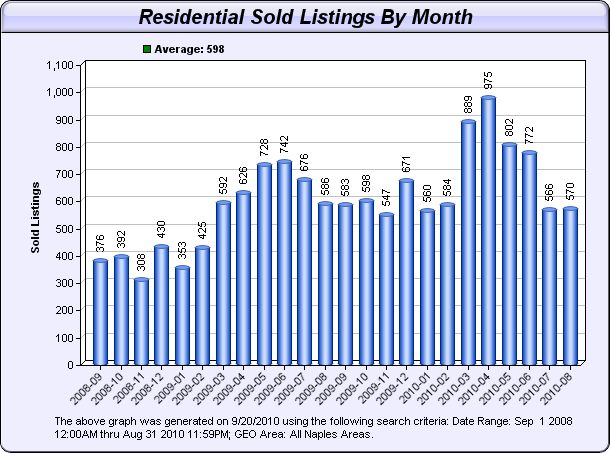 Keeping in mind that he’s referring to our neighboring Lee County cities (including Bonita Springs and Estero where we sell homes), what does that mean for Naples home values in the coming months?

I do see similar issues with local commercial vacancy rates and even some foreclosures in the smaller strip centers (I know of one prominent strip center on US 41 near Olde Naples going to the auction block later this month). On the other hand, residential sales still appear strong despite this month having the least sales activity historically. 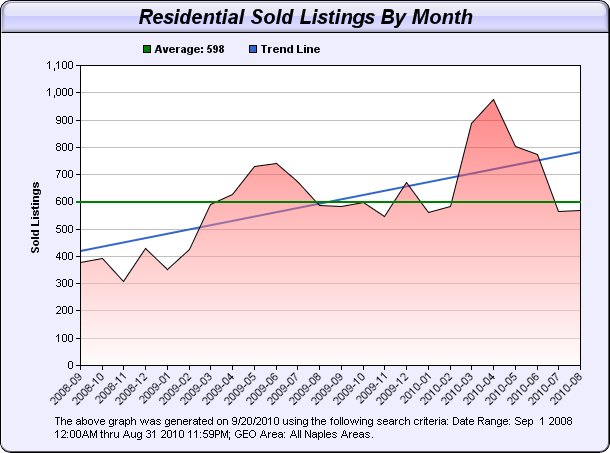 So far this September we are at 220 total sales and counting. Most sales come on the last day of the month so we should hit well above 300.

On the street we are seeing a similar story. After an unseasonably hot summer, the hottest on record for decades, and a Government that is not comforting to say the least, many buyers with cash on hand are waiting to see what the economy does in the coming months before pulling the trigger.

On the flip side (pun intended), there are those that are actively seeking deals right now and taking advantage of property foreclosures and properties discounted over 40% from their highs.

We continue to see some communities rise in value, like Marbella Lakes and Pelican Bay, while others bounce along the bottom.

For further charts on a specific community or to see any of the homes for sale listed on our website, please contact us below or call (239) 417-1115.